Not long ago, I participated in a forum discussion: Debt Snowball vs. Emergency Fund. The premise is very simple. Should the person start an emergency fund while he’s still in debt? In this case, we are talking specifically about credit card debt averaging 15% in interest.

In this article, we will follow this sample scenario: A man (we’ll call him Jerry) owes $5,000 in credit card debt at 15% interest rate. The monthly minimum payment on his credit cards is $100 per month. Jerry could pay $200 per month maximum.

If you are a Dave Ramsey fan, the answer is simple: “Start a $1,000 emergency fund then pay off debt using the Debt Snowball“. This way, you don’t have to rely on your credit cards in case of an emergency. If we follow the scenario above, Jerry would:

While I think Dave Ramsey’s plan is fine, I wouldn’t do it his way if I were in that situation. Personally, I want to use everything in my arsenal to pay down my debt as fast as I could. If we follow the scenario above, Jerry would:

Note: You could try out the various scenarios using the Financial Mentor’s Debt Reduction Calculator.

What would you do if you were in this situation?

Actually, Dave Ramsey would tell Jerry to sell some stuff/take on a second job/trim the budget to nothing, get that mini emergency fund in place for the inevitable, and quit screwing around. Two and a half to three years to get rid of $5k isn’t anything like focus, and coming at your debt like that is a sure way of keeping it around forever.

How about rolling the $5000 debt to a zero percent interest card (special balance offer) for 6 months. Build the emergency fund in those 6 months, pay down the debt at the same time and save yourself 6 months worth of interest.

Works even better if you can get a zero percent card at 12 months.

I’ve been in this situation before and decided to build an emergency fund before paying down debts. When emergencies happen, and they will, and you turn back to credit cards you are simply spinning your wheels.

For us, it worked out well to fund an emergency fund of about $3k to catch small to medium emergencies, keep one credit card open for catastrophic emergencies, and pay off everything else.

I do agree that the math looks appealing for paying off the debt first, but sometimes you have to pay a little for peace of mind.

Your scenario fails to take into account that Jerry might have an emergency. Would Jerry then need to grab his credit card to pay for it? What would the financial effect of THAT be? Yikes.

Putting the emergency expenses on the credit card is not the issue. It is the fact that it is there tempting you to use it for non-emergencies. Your definition of an emergency might change if you have $1,000 in the bank or a $5,000 credit limit.

I agree with the other commenters – I know for me personally, once I hit my credit card with that $1000 car repair, then it was REAL tempting to go out to dinner that night – cuz what’s another $80 on a $1000 day? And it’s a mood buster – you think you’re doing well paying down the debt and then it’s right back up again. 🙁

I tend to support your (Pinyo) point of view, but primarily because of the speed with which you could pay off this particular debt. I would think this would work especially well if you have an unused, low interest back up CC for the “emergencies”. You could acquire one prior to beginning the aggressive payoff. The problem with most is the addiction to using plastic for non emergencies, and thus the theory one must go cold turkey when aspiring to become debt free. I think also you have to define “emergency”. The only true emergency I can think of is… Read more »

We tried doing things the way your recommend (we have a lot more debt though) but “emergencies” kept cropping up. We got a little drastic and coughed up a $1,000 emergency fund and haven’t used our credit cards for over a year. The emergency fund is still intact and we’re making good progress on the debt. It’s amazing what qualifies as an emergency when your fund is plastic and what qualifies (or rather doesn’t) when you have to pull that hard won cash out of the bank to cover it. All of the sudden, my husband is a lot handier… Read more »

Thank you. I enjoy the various perspectives shared here. Let me just throw in two points:

1. Dave Ramsey’s argument assumes that people will continue to be irresponsible with credit cards and that’s why they need to be put away for good. If the person is determined to get out of debt and use his credit cards responsibly, I don’t see why my method wouldn’t work.

2. Let’s say you follow DR’s method and there’s an emergency, would you: (A) rebuild the emergency fund and further delay debt repayment, or (B) continue with the Debt Snowball full force?

If you can handle using credit cards for emergency use only, then the second way is better. I think DR’s method is for people who need to make a change in the way they handle their finances. At this point, the goal is to retire the debt once and for all. If that takes a little more time and money, but guarantees the debt is retired, then that is what it takes.

Although I agree with the overall result as you have clearly described above, I promote contributing to the “emergency fund” even with just a few dollars. The primary reason is that once people who are in debt complete the payoff, they don’t know what to do next!! I have seen this numerous times.

By getting in the habit of contributing to the emergency fund over a greater period of time, the person will have something they can contribute to once the debts are paid off.

I believe that with the overall result as you have clearly described above, I promote contributing to the “emergency fund” even with just a few dollars. The primary reason is that once people who are in debt complete the payoff, they don’t know what to do next!! I have seen this numerous times. Moreover I agree that an emergency fund is critical. I am in the process of setting up a mortgage ladder to serve as my emergency fund. Setting up six 6-months mortgage, one that matures every month…I am halfway there, hopefully I can reach my goal. How about… Read more »

I discovered Dave Ramsey’s radio about 6 years ago. We followed his advice. We are now in our 60’s. My husband and I were closed to paying off our mortgage but still needed $9000. In our driveway was a very pretty Honda Civic that was losing value. Dave always says, “sell the car”! The car is now gone, the mortgage paid off, my husband drives an old purple RAV 4 and we are enjoying “being on the other side” as Dave calls it. The mortgage payment goes to the bank of the Triplett Family and not GMAC. It’s fun to… Read more »

There is one more problem. If you pay down your credit cards the companies might lower your available credit. It’s happen to me 3 times. So much for the emergancy fund using your credit card.

It has been said before. Dave Ramsey can afford to use just 1,000 dollars as a security fund because he has liquified his assets and is staying at home every night until his debt is gone. You will run into less emergencies if you literally do nothing. If you actaully go Gazelle Intense rather than just pretending you do, you can get ahead quicker and literally be able to afford fun stuff later. Literally make people think you are crazy. Sell your clothes and wear the same shirt everyday.

I agree with paying down the credit card and using that as your “emergency fund.” Even if you have an emergency and need to charge up the card again, you will have saved however many months of 15% interest on the lower balance.

Disclaimer: The information on this site is strictly the author's opinion. It does NOT constitute financial, legal, or other advice of any kind. You should consult with a certified adviser for advice to your specific circumstances. While we try to ensure that the information on this site is accurate at the time of publication, information about third party products and services do change without notice. Please visit the official site for up-to-date information. For additional information, please review our legal disclaimers and privacy policy.
Image Credit: All uncredited images are screenshots or produced by Moolanomy.com, licensed from DepositPhotos or produced on Canva.com.
Advertising Disclosure: Moolanomy has affiliate relationships with some companies ("advertisers") and may be compensated if consumers choose to buy or subscribe to a product or service via our links. Our content is not provided or commissioned by our advertisers. Opinions expressed here are author's alone, not those of our advertisers, and have not been reviewed, approved or otherwise endorsed by our advertisers.
Debt Reduction

Start an Emergency Fund or Pay Off Debt?

Credit Cards Is it Good to Have a High Credit Limit? 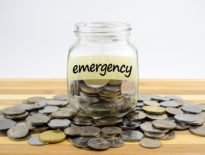