Debt Snowball is a debt elimination strategy popularized by Dave Ramsey, a renowned debt and personal finance guru. Under this method, you reduce your debt by paying the minimum monthly payment to all accounts, except the one with the smallest balance, which you’ll try to pay down as fast as you can.

How the Debt Snowball Method Works

The basic steps in the Debt Snowball debt reduction plan are as follows:

The idea is that you’ll be able to pay more toward the “smallest” debt each time a debt is fully paid off.

The process is named the “snowball method” because the payments you are sending to creditors grow larger over time, much like a rolling snowball. You gain psychological momentum by achieving a quick win by paying off the smallest debt first.

Here is an illustration of the Debt Snowball method. 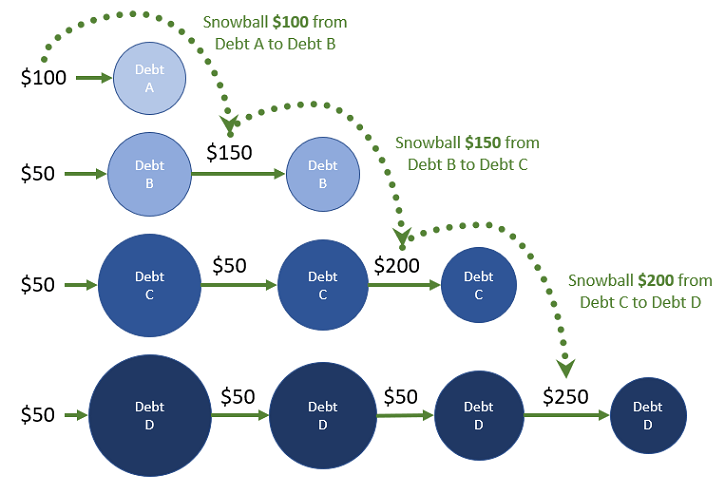 From the image, you can see Debt A is the smallest, followed by Debt B, Debt C, and the largest, Debt D. Assume you have $250 to pay each month and $50 is the minimum payment on each. You’d pay $50 on each, except you pay $100 toward your smallest one (Debt A).

Once Debt A is paid off, you roll the $100 payment toward Debt B, thus creating the “snowball” effect.

You would order the accounts from the lowest balance to the highest balance using the Debt Snowball Method, like below:

To keep this simple, let’s assume each debt requires a minimum payment of $25 per month and we are leaving out the increases in the balance due to finance charges. Also, let’s assume you’ve budgeted $200 per month to pay off your debt.

Here’s the example in a table format to help you visualize the process.

The biggest controversy surrounding the debt snowball method is the disregard of the interest rate when it comes to prioritizing the accounts.

The logic here is that if you choose to pay down the debts with the highest interest rates first (without taking balance sizes into consideration) you truly can eliminate debts in a faster period of time. By paying the higher interest accounts you also will be saving money in finance charges.

Depending on how logical your brain is with math the debt snowball may or may not work for you. Yet it is not uncommon for some people to stick to the snowball method purely for the psychological reasoning and benefits rather than pure math.

For instance, the debt snowball method works well for some people simply because they see results much faster. By starting with the lowest balances rather than the highest interest rates, they can see that “Paid in Full” statement faster. This can be a huge motivating factor when you are trying to stay on track for eliminating debts.

Conversely, if you start with the higher interest balances it likely will take you much longer to see the debt actually go away even though you’ll limit the amount of interest you pay.

Debt Avalanche is similar to Debt Snowball, but the idea is to pay off the highest interest debt first — something I also advocate and wrote in my debt reduction guide.

From the above example, you would order the accounts from the highest interest to the lowest interest using the Debt Avalanche Method, like below:

An Example of Debt Snowball vs. Debt Avalanche

Let’s take a look at another example.

The Jones have two car loans and some credit card debt. They have enough money to make all of their payments plus $170 extra each month to help knock their debt out faster.

How do the two methods (Debt Snowball vs. Debt Avalanche) pan out?

With the Debt Snowball method the Jones would pay off their debts in this order:

Not bad, but let’s look at the Debt Avalanche method next. This is how the debt would be paid off:

Here are a few articles about Debt Avalanche:

There are many variations of the Debt Snowball methods, i.e., Debt Snowflake, Debt Deluge, etc.

Start an Emergency Fund or Pay Off Debt?
How to Get Rid of Debt Fast
Are You Responsible for Your Spouse's Debt?
Starting Over by Declaring Personal Bankruptcy
Dave Ramsey’s Baby Steps Review and Analysis
How to Overcome a Personal Debt Crisis
5 Ways to Pay Back Student Loans Faster
Dave Ramsey's How to Drive Free and Retire Rich

I’m a fan of the snowball method for anyone that has trouble with structure and discipline. Sure the math doesn’t always work out in their favor, but Ramsey understands the psychology of personal finance better than anyone else.

This is a really great all-in-one explanation. You my friend are bookmarked.

You might want to really think about this – why would you first pay the highest interest rate and not the highest monthly finance change? I’ve seen this on 1000 times over the years and it makes no sense. No one has ever written about this..ever! You are NOT being charge an interest rate people..wake up. You are being charged a FINANCE charge every month. Those are two different things. Why are you looking at an interest rate? Who cares what that is when you’ve got the true amount you’re being charged. It’s the finance charge. If you look at… Read more »

I agree that this is a great explanation. I like much of what Ramsey but am getting weary of the Ramsey worship. How did a basic tenant of debt reduction become “Dave Ramsey’s Debt Snowball?” I’m waiting for the trademark symbol and some litigation threats.

good look at the debt snowball, especially enjoyed your graphic aids! 🙂 I think people like to complain about how Ramsey isn’t “good at math” or how his methods are for people who can’t add. The problem is people don’t get into debt by only using math – and you have to take into account the psychology when getting out of debt as well. Thus, with the debt snowball method you get those quick wins to keep you motivated and moving towards the goal of removing the debt. If people are motivated and want to use another method to get… Read more »

Great article! I love this idea, have heard about it before, and am actively involved in a debt snowball of my own. I will say, though, that this article might be my favorite summary of this debt repayment method. I agree with Peter that using this method is a great way for staying motivated with quick wins. As to the idea of snowflakes, I advocate the use of windfall money like annual bonuses or tax refunds to accelerate debt repayment.

Enjoy the site (just added you to my blogroll), keep up the good work!

Great article pinyo! While the concept is pretty simple, the illustration makes it even easier to understand!

@ Pinyo – Thanks for the reference; Now, I have a totally new variation, called the Cash Cascade here: http://7million7years.com/2008/12/09/the-cash-cascade-tm/ This video addresses the fundamental problem of paying down debt … it’s not ALWAYS a good thing; you see, the old ‘good debt v bad debt’ argument only comes into play when you are thinking of ACQUIRING DEBT. So, the Cash Cascade is based on the principle that ONCE YOU ARE IN DEBT there is no such thing as ‘good debt’ and ‘bad debt’ any more, only ‘cheap debt’ and ‘expensive debt’ that you should exploit (carefully) for building wealth.… Read more »

Great article! I am a Dave Ramsey fan and facilitate the class at my church. I doubt he would have a problem with any of the variations of the plan to get out of debt. The baby steps he uses are just that, baby steps and the idea is to celebrate the small victories which then lead to bigger victories. As others have said, if you have the discipline to attack higher interest rate ones, then more power to you.

We follow the Dave Ramsey plan in our household. I tried for years to get my wife to be onboard about paying off all the debt ASAP, she wasn’t having it. Since he is a Christian my wife was more than willing to jump on board, why that needed to happen is beyond me, but it worked and we are trying to accomplish this goal. His plan for her because money has an emotional effect on her and having those small victories as we knock a debt down one by one keeps her motivated. As Dave Ramsey says; I am… Read more »

The best thing anyone can do is pay off their debt as fast as possible. Drive old cars and eat beans. That is what I did.

It was a 3 back to back hardships that tore my sails of hope in being financially ok. So here I am today cancer free, partials and a scare to boot. My credit plunged into that dreaded hole of no return. Presently I work 2 jobs to the bone just to keep my jobs. I am now at my mom’s, my dad is taking me to court because he believes I am financially helping my mom LOL. Oh I am now 40,000.00 in debt and have to cash advances dragging along too. Oh and the cash advances kept the rent… Read more »

Disclaimer: The information on this site is strictly the author's opinion. It does NOT constitute financial, legal, or other advice of any kind. You should consult with a certified adviser for advice to your specific circumstances. While we try to ensure that the information on this site is accurate at the time of publication, information about third party products and services do change without notice. Please visit the official site for up-to-date information. For additional information, please review our legal disclaimers and privacy policy.
Image Credit: All uncredited images are screenshots or produced by Moolanomy.com, licensed from DepositPhotos or produced on Canva.com.
Advertising Disclosure: Moolanomy has affiliate relationships with some companies ("advertisers") and may be compensated if consumers choose to buy or subscribe to a product or service via our links. Our content is not provided or commissioned by our advertisers. Opinions expressed here are author's alone, not those of our advertisers, and have not been reviewed, approved or otherwise endorsed by our advertisers.
Debt Reduction