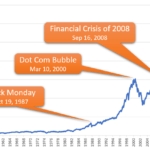 The S&P 500 index is comprised of 500 of the largest and leading companies on the market today. The original S&P index debuted in 1927 with 233 stocks and did not expand to the current 500 companies until 1957. Many investors that seek diversification will look to S&P 500 index funds; by “owning the index” you spread your funds out across a huge swath of companies.

But before you jump into any investment, even if it is the S&P 500, you should know how it has performed in the past. With the S&P 500 finding the historical rate of return is surprisingly challenging to do.

How to Calculate the Historical Return of the S&P 500

To figure out what the index has returned over a period of time, you need two things: the historical data and the proper math.

The problem with looking for the historical return of the S&P 500 is finding the actual historical data to run the calculations. Unless you subscribe to a service from Standard and Poor’s, finding correct data can be quite tricky.

There are a few places you can find mostly complete and well-presented data:

However, you must be careful about the accuracy of some online data. You will find some spreadsheets that date back to the 1870s. Considering the S&P index didn’t debut until 1927 and didn’t reach 500 companies until 1957, there are assumptions baked into numbers previous to that. Stick with more traditional data for your calculations.

Once you have the data, you can’t necessarily do an average of all of the returns. There are multiple methodologies you can use: median, mean, compound annual growth rate (CAGR), and so on.

The CAGR calculator (e.g., from Moneychimp) shows you what the simple average is over a given period and what the more accurate (and usually lower by 1-2%) CAGR for the same period is. (It should be noted that the returns also include dividend payments as part of the overall return.)

Is the S&P 500’s return always going to be 9.97%? Absolutely not. The index has had years with a positive return of 43.40% (1958) and others where it dropped 37.22% (2008). What is more important is what it will return during your investment time period, but historical averages are not an indicator of future performance.

However, things have changed a lot since 1957, so it might be a better exercise to see what the annualized return is for the past few decades instead of the past 70+ years.

As you can see timing can affect the return by quite a bit. Of the three scenarios, I like the 30 years period the best. On average, you should be able to expect a healthy return in the 7 to 10% range with a long enough investment horizon. For most of the calculations on our web site, we use 9% as the average rate of return for the S&P 500.

The S&P 500 Annual Return and Yield 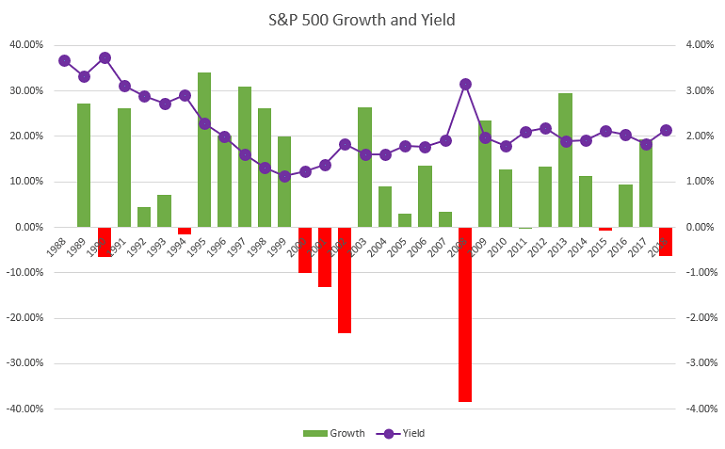 Just to put things into a visual perspective. This is how the S&P 500 has grown and how the major crashes look. 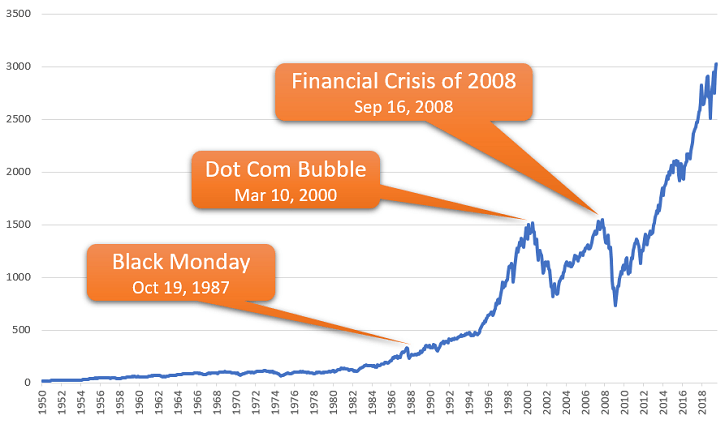 There is a natural tendency for the average investors to get into stocks when prices are going up and jump out of the market when things turn south. This is utterly opposite of what the smart investor does: buys stocks when they go on sale and sells stocks when they are overpriced.

But it can be hard to know when stocks are over or underpriced.

To avoid worrying about what the average return of an index is, simplify your finances by consistently investing in the index with dollar cost averaging. When the S&P 500 soars, your money will buy fewer shares than it does when the stock market tanks.

Many performance averages assume you had 100% of your money in the investment at the beginning and end of the period. This is not how investing works for a majority of investors: you build up your assets over time. So while the CAGR of the last decade is just shy of 8%, your performance could be significantly higher if you maintained a sound investing policy of consistent investment.

What are Exchange-Traded Funds (ETFs)?
Introduction to Morningstar Style Box
Comparing CDs, Peer-to-Peer Lending, and Reward Checking Accounts
Lost Money In The Stock Market, What Should I Do?
Are Bonds and Bond Funds Safe Investments?
Should I Invest in the Vanguard GNMA Fund?
Should You Own Individual Stocks?
The First Million is the Hardest

You are one of my favorite writer. Thanks for another informative aritle. However have to disagree with your statement “it can be hard to know when stocks are over or underpriced”. I agree that no one can or should try top pick short term tops and bottoms. But we CAN access the risk of the stock market by it’s valuations. Those of us who avoided the outrageous stock valuations of 2000 and 2007 were able to produce superior rates of return by not losing a major chunk of our portfolio. Anyone that was paying attention in the spring of 2009… Read more »

What is the average years people work with a 401k? 20 to 65? it’d be interesting to see index performance for forty five years where we invest 10% of our income every month with adjustments for cost of inflation, raises, and sometimes losing a job. In any event, ten year horizon seems too short. I’m just interested in index performance not individual stocks.

Disclaimer: The information on this site is strictly the author's opinion. It does NOT constitute financial, legal, or other advice of any kind. You should consult with a certified adviser for advice to your specific circumstances. While we try to ensure that the information on this site is accurate at the time of publication, information about third party products and services do change without notice. Please visit the official site for up-to-date information. For additional information, please review our legal disclaimers and privacy policy.
Image Credit: All uncredited images are screenshots or produced by Moolanomy.com, licensed from DepositPhotos or produced on Canva.com.
Advertising Disclosure: Moolanomy has affiliate relationships with some companies ("advertisers") and may be compensated if consumers choose to buy or subscribe to a product or service via our links. Our content is not provided or commissioned by our advertisers. Opinions expressed here are author's alone, not those of our advertisers, and have not been reviewed, approved or otherwise endorsed by our advertisers.
Investing 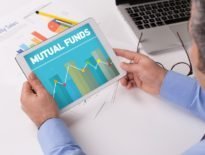 Investing Should You Invest in Target Date Funds? Pros and C… 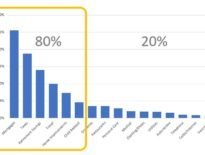 Smart Spending 80/20 Rule: Use the Pareto Principle to Improve Yo…
2
wpDiscuz
2
0
Would love your thoughts, please comment.x
()
x
| Reply